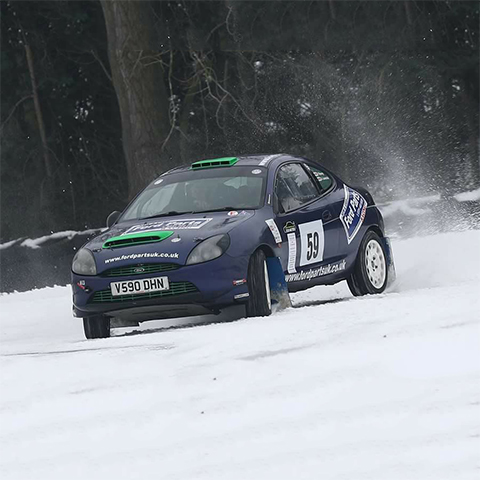 As we awoke to another snowy scene which has become a common occurrence this winter, there was much excitement in the PG Motorsport team at the prospect of navigating ourselves around the slippery stages of the Jack Frost Rally 2018. After our performance on the Christmas Stages in December, where we came in after the first stage to the news that we were leading the rally outright, there was an added expectation placed upon our shoulders. Throughout the build up to the rally we had been approached by many people asking if we would once again lead the rally after stage 1, and instead of setting off as an underdog we felt a pressure to put in a good performance.

Compared to the slushy mess of the Christmas Stages where we had snow from the previous day rapidly melting and producing a clean line, the Jack Frost had a totally different surface for us to play on. As the now defunct British Rail once claimed, this is the wrong type of snow, in fact is was mainly pure ice!

Snow which had fallen during the early hours of Thursday morning had compacted and then froze solid, it was obvious from the start that the ice was in for the day and no amount of cars were going to dig it up. There was also the added complication of more heavy snow forecast for around midday.

This gave the organisers of the rally a headache. Due to the extra time required for cars to skate around the stages, they were faced with either setting cars off at 1 minute intervals, or sticking with 30 second intervals and running each stage 1 lap short. They opted for the latter and the cars were soon underway, a good decision and well done to the organisers for the quick thinking in challenging conditions.

As we set off in to the first stage it was immediately evident that just getting to the end of this rally would be a major achievement, the handbrake was used to get around the first corner and subsequently used almost every time we needed to change direction, at one point Phil exclaimed “that handbrake has been used more times today than it has since it was fitted!”. Even on the straights the wheels were never pointing straight, watching Gary’s hands and arms you could have been excused for thinking he was trying to moor HMS Ocean, rather than drive in a straight line.

We came in to service after a reasonably smooth run, the hardest part was trying to get around the tight chicanes where the ice had polished up and the grip was almost none existent, liberal application of the handbrake and a delicate throttle control just about saw us through. A quick check of the results showed us sitting 23rd O/A and 3rd in class, a good start.

Stage 2 started and by this point the stage had been traversed by almost 80 cars, each of which had polished the ice a little bit more. The result was that the stage had become much more slippery than the first run, with almost all crews setting a slower time on the 2nd run when compared to the first. We managed to only drop 5 seconds which was good in comparison to a lot of other crews, who were dropping 30-60 seconds. After stage 2 we had moved up 1 place to 22nd O/A.

Stage 3 was a new layout, and as we queued for the start the forecast snow started to fall. Very lightly at first but steadily increasing in intensity throughout the day. At this point we were unsure if the fresh snow would help or hinder with grip levels so a quick learning curve was needed through the first few corners. The stage was going well but as we hit the merge we got caught in a line of traffic which we couldn’t manage to pass for the remainder. We were quicker under braking and in the corners, but seemed to be struggling for traction out of the corners much more than the cars around us. It was a similar story for stage 4, and whilst the times were still reasonable we were a little off our SS1/2 pace. After SS4 we were sitting 25th O/A and still 3rd in class.

During the lunch break we had a walk around and spoke to other competitors to see if we could pick up any hints on how to improve our traction out of the corners. This was our first attempt at driving on ice so we were open to all suggestions. One of the most common suggestions was to short shift the gears quite extremely to try and control the wheel spin. Whilst we had been short shifting during the morning, it seemed that we should try doing it to a more extreme degree.

As we entered stage 5 we encountered an Evo 6 at the merge almost immediately, we got out in front of it and so the pressure was on to pull a gap, otherwise we’d have to let it pass. The new short shifting method was working well, we slowly pulled away from the Evo and could concentrate on what was in front rather than checking our mirrors constantly. Gary was getting up in to 5th gear as quickly as possible and letting the gears do the work of controlling the wheel spin. As the results came in for SS5 it was evident that we’d made a significant increase in pace, we set the 19th fastest stage time and were the 3rd fastest front wheel drive car on that stage. The result was that we jumped back up to 22nd O/A and had managed to clinch the 2nd in class position, with a lead of 17 seconds over our closest class rival.

Due to the worsening weather the call was made by the organisers to cancel stages 7 & 8, making stage 6 the final stage of the day. We were too far adrift from Stevie Irwin and Ian Middleton in their Nova to make a challenge on 1st in class, so the target was to ensure that we set another good time to consolidate our 2nd in class position, which would mean good points for us in the North of England and Whickham & Distract stage rally championships.

Stage 6 went fairly smoothly, although with the snow turning to rain some of the ice was starting to churn up and in places there was more grip than expected, but in others it was just as slippery as before. Nevertheless we made it to the end of stage 6 in one piece and secured 22nd O/A and 2nd in class 2, a great result for the Puma in treacherous conditions.

The biggest vote of thanks must go to the marshals. They stood out all day long, braving rain, snow, hail, ice and wind. Even when the check sheets were disintegrating before their very eyes they maintained a smile and a friendly approach. We couldn’t do it without this dedicated bunch, and for that we salute you.

Thanks to Trev Coulson for the excellent photo.