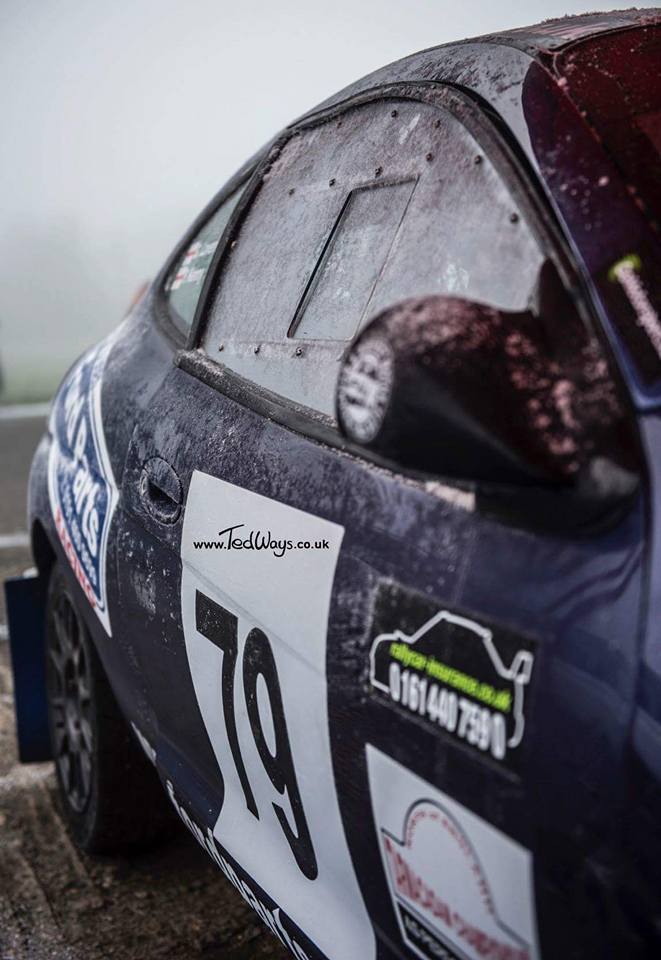 A great day at the Jack Frost Stages yesterday in the Puma. The aim for the rally was to get in the top 50 and to beat some of the cars that beat us at the Christmas stages.

There was a strong field of cars present with the event being a round of the Motorsport News championship.

After scrutineering on Saturday afternoon it was a relaxed start to the day, albeit a very cold one, having to scrape ice off the car before we even turned a wheel.

Stage 1 was started on super soft Dunlop tyres up front to account for the icy conditions, even so it was a very slippy first stage and a bit of a shock to the system, but we made it round in one piece with just a slight shunt to one of the bales at a chicane.

Stage 2 was eventful as both wing mirrors were lost to the chicanes, one departing in spectacular fashion, we’d just put them on brand new!

An overshoot on stage 3 due to a lockup was the first real mistake of the day but we guided it away from the bales and no damage was done. A quick bit of reversing and we were off again, but it didn’t go unnoticed by the spectators unfortunately.

Stages 4 and 5 went very well, the car was performing great, very balanced in the corners and loads of grip as the ice thawed. A nearly new set of Pirelli RX9’s were fitted in the lunch break which really inspired confidence and the car was going faster than ever before.

Stage 6 was frustrating, stuck behind a E30 BMW for 2 laps which didn’t seem to be moving over despite being on the horn and flashing the lights. They had a slight pull on us in the straights so we just couldn’t get past. An over optimistic outbraking manoeuvre followed in to a chicane where we briefly lost the back end and went past the BMW sideways. Control was regained just before the chicane but we couldn’t make it around the 3rd bale and vaulted over the top of a tyre, a lucky escape.

The lamp pod was fitted for stages 7 & 8 in the dark, which our young eyes seem to give us a slight advantage on. 2 good stages to finish off the day in 45th overall, objectives achieved.

We have joined the ANCC championship so we will be competing in as many rounds as possible, as well as continuing in the AS Performance North of England championship.

The next event is planned to be the DCC stages at Ingliston in April, and we’re trying to get an LSD fitted before then.

Thanks to all of the event organisers, marshals and setup crews for putting on a great event and braving the cold. Another big thanks to all friends and family who helped us with transport, servicing and support.