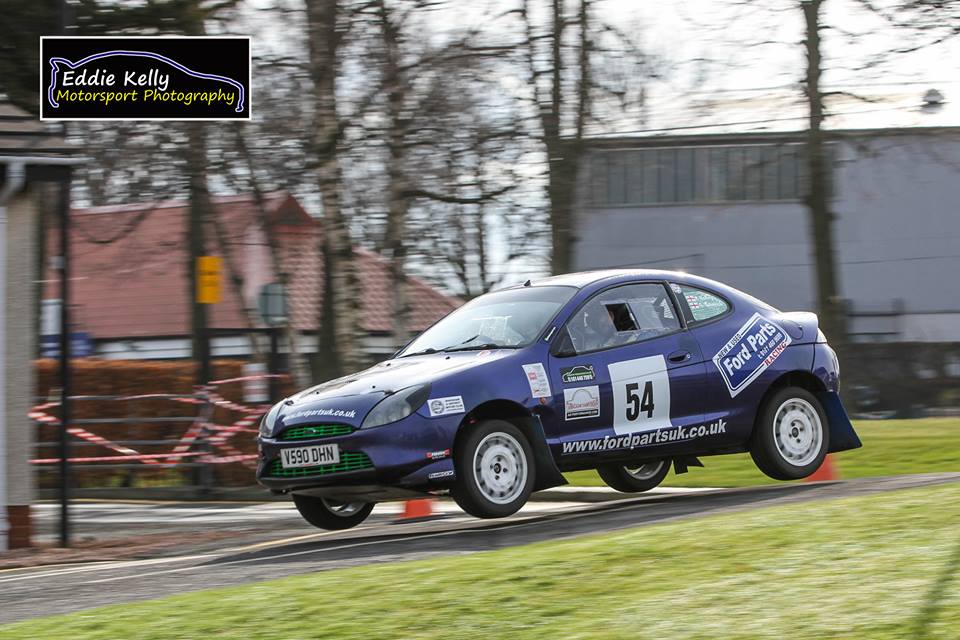 After a long 3 months since the last event the DCC stages had finally arrived. The DCC stages is a tarmac single venue rally based in the grounds of the Royal Highland Centre and uses the old Ingliston racing circuit to create a compact but challenging rally which would test the reliability of many cars on the day due to the numerous 90 degree corners putting great stresses on the drivetrain. 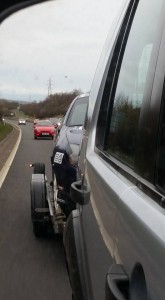 We travelled up the A1 in a Puma convoy on Friday afternoon to scrutineer and sign on, before spending a night in the Travelodge so that we could get a fresh start to the rally on Saturday morning. Prior to the event we had prepared the car by fitting new CV joints to the driveshafts, fitting some new design polybushes to the front arms and refitting a wing mirror after the damage sustained in the last rally.

The day started damp and greasy so we opted to run Pirelli soft tyres up front and Pirelli intermediates on the rear. As soon as we left the start line of stage 1 we could feel that the stage was extremely greasy, at times the car felt totally out of shape at just 20mph and each corner had a different level of grip, making choosing the braking point a somewhat hazardous venture. At the end of the stage Gary felt that they had gone around at a snail’s pace, however Phil reassured him that from the navigators seat it felt smooth and tidy and the time should be ok, a quick check of the results showed we were 37th quickest out of the 75 starters on stage 1. 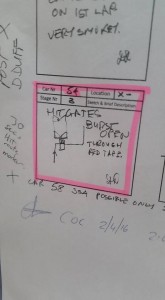 As we started stage 2 the difference in grip was immediately apparent, the road was drying and we could push on with some more confidence. We followed in the wake of car 58, the 1600 Vauxhall Corsa of Nigel and Helen Harkness for most of the stage. This provided a good opportunity to pick up some tips on the quickest way around the venue as Nigel can really pedal the Corsa, the unfortunate side effect being that the lack of airflow from running close to the back of the Corsa meant our engine temps were soaring at the end of the stage. This time we were 34th quickest car on the road, and the stage time was a huge 48 seconds quicker than stage 1, despite the stage being the same layout.

As has become an unwanted tradition, stage 3 involved a slight incident. At Fulbeck we ended up in a ditch, on the Christmas stages we had a spin and on the Jack Frost an overshoot. At Ingliston the incident of choice would be a lock up at the end of a set of fast corners into a 90 right. The failure to stop in time for the corner saw us punt a set of metal gates with the nose of the Puma, however no damage was done and we selected reverse quickly and lost barely any time at all. From speaking to people after the stage it seems everybody in the venue knew the car wasn’t going to stop in time, apart from Gary, who had every confidence in the Puma’s brakes! Unfortunately the incident bagged us a 30 second penalty for hitting stage furniture, nonetheless we were 32nd quickest on stage 3.

For stage 4 we switched from the Pirelli soft tyres up front to a pair of Dunlop Medium tyres. This was due to the drying track and increasing temperatures meaning the soft tyres were beginning to overheat. A clean run around saw us maintain our 32nd quickest time, improving on stage 3 by 8 seconds.

After the lunch break we were back out for stage 5, the setup crews had been out and reversed the stage layout, so everything that we’d done this morning was now going to happen the other way around. The starting order had become somewhat muddled as people dropped out and others faced delays with problems, this meant that we were on stage with some much quicker machinery and had to be vigilant not to hold anybody up. This was a difficult stage spending so much time checking the mirrors and not being able to fully concentrate on driving to our maximum ability, the stage position showed this, coming in as 42nd quickest car on stage 5.

Stage 6 was a much cleaner run with no hold ups, the sky was becoming darker as the forecast rain began to arrive. It was for this reason that we had switched back to soft tyres for this stage. Perhaps a gamble as the road was still dry when we changed the tyres, however by the time we were on the start line we knew we’d made the right choice as the road was progressively becoming damper and the tyres maintained a stable temperature throughout the stage. The clean run showed our potential, setting the 30th quickest time of the stage.

As stages 7 & 8 approached the road was getting a good coating of rain, however we did not worry as this suits our underpowered car. While the more powerful cars struggled to get their additional power down in the wet, we were able to push on just as hard and we shot up the results board. Stage 7 saw us set the 20th quickest time of the stage, despite getting held up slightly behind a train of 3 cars. Stage 8 went just as well, catching the 2000cc Escort which started the stage 30 seconds before us and crossing the finish line on his bumper.

Another finish in the bag, we feel good in the car and work well as a team. The car was faultless all day which let us focus on driving it as hard as possible to an eventual position of 32nd overall, our best result to date. We also scored points in the North of England Tarmac championship. 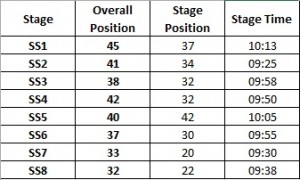 A big thanks goes out to all of the organisers, marshals, set up crews and Dunfermline Car Club for a well-run event at a good venue. We must also thank our sponsor, Ford Parts, who offer us great support.

Finally a big thanks to our service man Luke Tait who does a great job on the spanners, even helping car 65, the other Puma, to change a driveshaft to keep them in the event, and Paul Kenny for being a great help in so many ways and also keeping us fed and watered all day long with his catering skills.

A long run now until the Tyneside Stages in August, but we hope to make some good improvements to the car over the summer months and come back even more competitive. 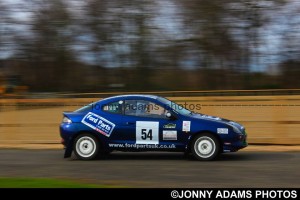