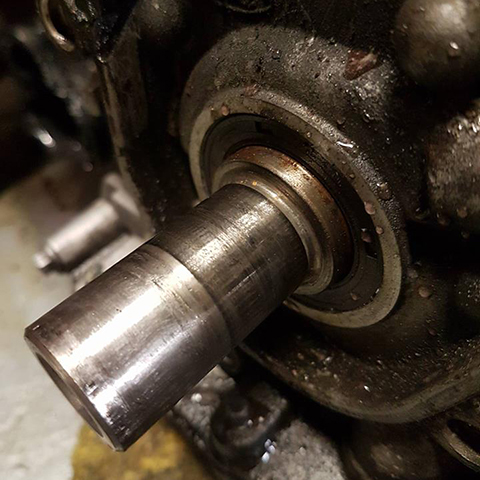 It’s been a long 10 months since our indiscretion with a bridge on the Cheviot Keith Knox Rally, and in that time the little Ford Puma has undergone quite a transformation.

The priority was to fix the damage inflicted by the bridge, which involved a new wishbone, track rod, track rod end, front wing, door and rear quarter. A donor car was bought to provide the wing, door and quarter, but unfortunately it was red. Not to worry, the team at Performance North-East soon had the Puma back in one colour and looking great. Some new stickers from our sponsor, Ford Parts, finished the job nicely. 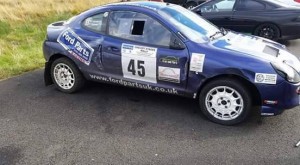 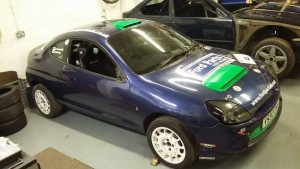 Whilst the car was off the road for so long, we decided it was a good time to fit some parts which we had been collecting for a while. These included Alcon 4 pot brakes, paired with Performance Friction Brakes 295mmx28mm 2 piece grooved discs, 08 compound pads and RH665 fluid, all provided by Alyn at AS Performance. The brake bells were made up by Bob at Specialist Services and he did an excellent job, everything lined up perfectly first time. In order to get everything to fit behind the 15″ wheels we also fitted some 20mm aluminium wheel spacers and extended studs, along with new wheel bearings while we were at it. 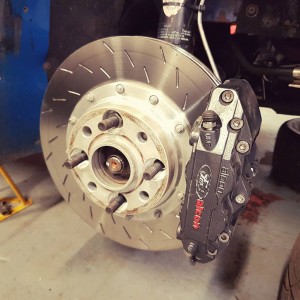 To compliment the new brakes, a Puma specific Compbrake Motorsport bias pedal box was fitted alongside AP Racing master cylinders and remote fluid reservoirs. Once again Alyn at AS Performance acquired all of the fittings and lines from Torques that we needed to pipe everything together. 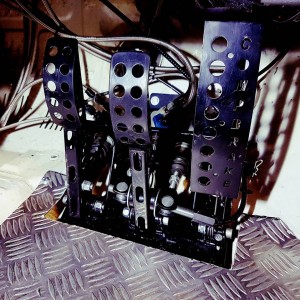 The icing on the cake was bolting a set of Jenvey 42mm direct to head individual throttle bodies, with PH2 Newman Cams and an Omex Technology 600 ECU to the Ford Zetec SE 1600cc engine. After a session on the rolling road the Puma came out with 130bhp, 32bhp more than the standard engines 98bhp, and 120lb/ft of torque from 2000rpm all the way to 7000rpm. Whilst the power figure wasn’t as high as we had expected, the engine was very drivable and a definite improvement on the old 1700cc. We expect there will be more power to come from the engine in the coming months once a few issues have been addressed. 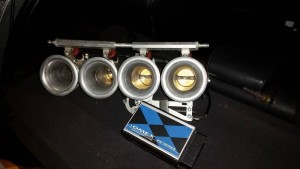 A couple of smaller additions to the car were a roof vent and bonnet vent, painted of course in the customary luminous green.

Having said all of this, it had been 10 months since Gary had last driven a car competitively, and the car was now very different from previously, and mostly untested due to the tight timescale involved in preparing for the rally. Needless to say, there was quite a bit of apprehension sitting on the start line of SS1.

As we entered the first braking zone, the feedback from the new brakes was good and Gary felt that given a couple of stages the trust and confidence in the brakes would be back to where we left off 10 months ago, however for the first 2 stages the brakes weren’t pushed too hard, just incase!

We completed stage one in 9:23, which was 48th quickest time of 90 starters. In stage 2 (which was a repeat of stage 1), we improved on this time by 21 seconds. We were pleased to get straight back in to the swing of things on the Pacenotes after the long break, we immediately clicked back in to a rhythm, with Phil’s excellent delivery meaning we were pushing on straight from the start. After 2 stages we were 46th overall and 6th in class 2.

For stages 3 & 4, the layout was switched, starting from the opposite side of the ranges, but still travelling in a clockwise direction. With the confidence in the brakes now high, and the engine pulling well (relatively!), we had a very good run through stage 3. Our time was 4th fastest in class 2, we’d moved up to 39th overall, and we were sitting 4th in class 2. This was our highest ever class position, showing that we’d made the right choice to swap to the 1600cc engine and drop down a class.

We did have a slight moment in stage 3 due to leaving the braking for a chicane far too late, getting all out of shape, but just managing to get slowed down enough and through the chicane. The new pedal box justified itself beyond doubt in these few moments, as the feel through the pedal played no small part in allowing us to scrub off enough speed to negotiate the chicane, without locking up and ploughing straight on. This whole incident resulted in a round of applause from the adjacent marshals, who at one point must have been preparing themselves to be sweeping up lots of Ford Puma parts.
We received another round of applause on stage 3 from the marshals at the hairpin, who obviously appreciated our flamboyant handbrake turn.

Stage 4 started off well, however Gary got slightly “optimistic”, (if you speak to Phil he’ll probably say “stupid”), and tried to navigate a long 5 right in to an immediate 5 left flat out. As it turns out, the long 5 right isn’t flat, and the back end stepped out as we broached the crest, resulting in a fast sideways detour through the mounds of grass and soil, taking off 3 of our mudflaps. It was a small miracle that the car didn’t dig in and roll over, but as they say, God loves a trier!

We reversed through the grass and rejoined the stage behind a Peugeot 206, which we spent quite a lot of time stuck behind until it turned off at the split. It was 2 miles after this that our rally came to a swift end. The engines rev limit had been raised to 7400rpm, from 6800rpm, but the Ford crank pulley could’t cope with the additional stress (due to being an interference fit and not having a woodruff key). The pulley slipped on the crankshaft, which threw the engine timing out and bent the valves. 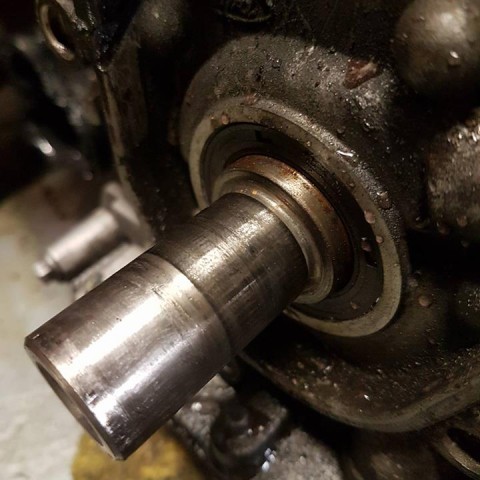 Despite this, we weren’t too disappointed, as all of the other work on the car had proven successful and the car was feeling better than ever. With a bit more seat time we belive the car can become class competitive, which has been our ultimate goal for a long time now. The next rally is the Keldine Autos Cheviot Keith Knox Rally on 22nd October. We’ll get a new engine in the car and address the crank pulley issue in the next few weeks. Thanks to everybody who played a part in making the Pendragon Stages Rally happen, it’s a very enjoyable event and we’re sure to be back next year.