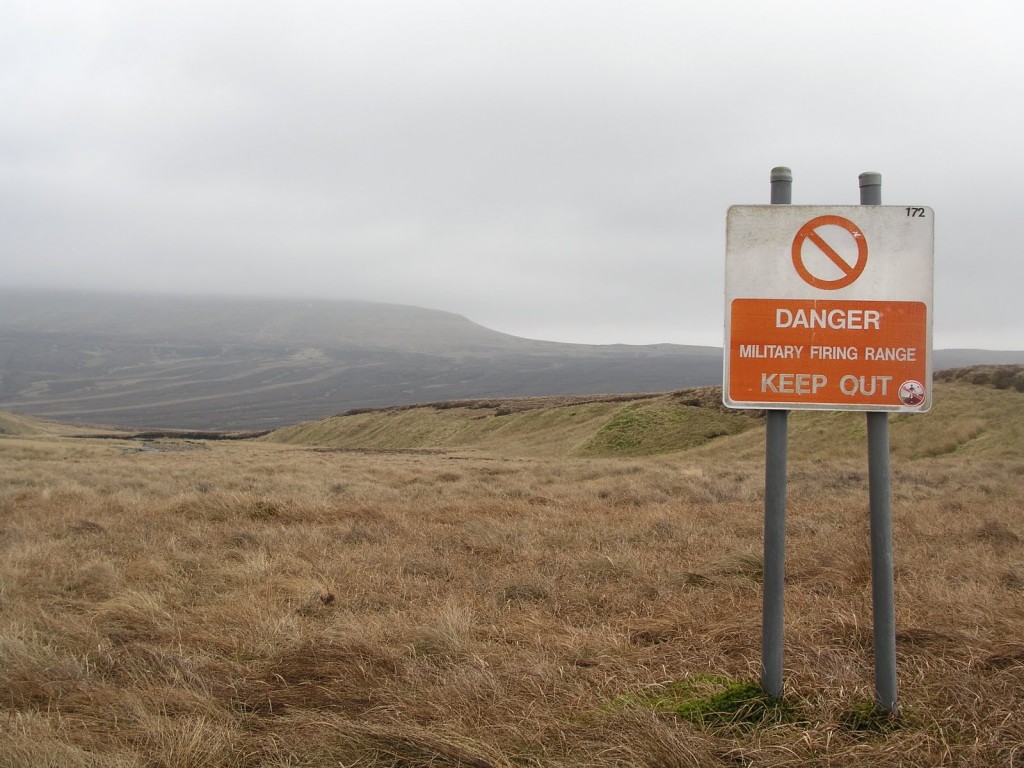 The Pendragon Stages, what a crazy event! Unlike all previous rallies we have entered, Gary had no prior knowledge of the roads which lay inside the Warcop Military Ranges, the most he had seen was one junction that we marshalled on at last year’s event. Before the event he had been very apprehensive, it was the thought of driving slowly on unfamiliar roads that was the biggest fear, we couldn’t allow the Puma to be seen tootling around!

The day started early, needing to scrutineer and sign on before setting up our service area and doing the final car checks, our start time was 9.19am. The forecast was for a dry day with highs of 17c so we put on a pair of soft tyres up front and the trusty intermediates on the rear, a setup we know works well on early morning stages when the ground is still quite chilly.

Setting off in to SS1 it was immediately evident that this was going to be a difficult event to finish, there were cars off the road left, right and centre. We had known prior to the rally that there are always a lot of retirements, but the scale of carnage in only the first stage was staggering. There were cars in trees, ditches and up banks, there were even places where 2 cars had collided and were stopped next to each other! With this is mind the first stage was driven relatively sensibly, but still beginning to explore the boundaries of grip in places.

Out of SS1 and it was straight back down the road to queue up for SS2, which we were straight in to. A more aggressive run saw us take 20 seconds out of our previous time, although we did get held up for a little while trying to pass a Citroen AX. The roads are tight and twisty, mainly 2nd and 3rd gear, and we felt that this event would suit our car quite well.

After returning back to service the temperature was hotting up, and with SS3 due to begin around midday we swapped to some medium compound tyres up front and swapped the intermediates on the rear for some super softs. The hub nut of the driver’s side front wheel also needed a nip up as it was starting to work loose, other than that we just needed some fuel and we were ready to go.

Stage 3 would start from the other side of the ranges so there was a short road section to arrive at the start control. We used this as an opportunity to get some heat in to the medium compound tyres but a queue at the start meant this was all lost. A tricky start to the stage and the car didn’t really come alive until about half way through when Gary felt the grip start to come back and got the confidence to push on harder again. Phil had spotted some points where we could make up time and noted them for the second running of the stage.

Stage 4 started much better, the grip was there almost immediately and we really pushed on getting quite a clean run and passing a few cars in stage. A particular highlight of this stage was a hairpin right where we had to use the handbrake, the marshals on the corner were appreciative of our handbrake turns and gave a standing ovation each time we passed, although Gary did overcook it 1 or 2 times and ended up slightly in the grass! Not to worry there was no damage done, although there was a 9R over crest were we did get particularly close to falling in to a ditch on a couple of occasions. Phil had some stern words in Gary’s ear to ensure we kept the car on the road and didn’t join the numerous others parked up at the side. We ended stage 4 twenty-five seconds quicker than stage 3, showing Phil was right to point out the areas we could push on more.

We retuned to the service area for lunch, a few checks on the car and everything was still good so we could relax and check some results with other competitors. Before we could even get to the results website we had emails and text messages from friends and family saying well done and to keep it up, we must have been doing something good! A quick check showed we were sitting at 25th out of 90 competitors, something which shocked us quite a lot. This put the pressure on to bring the car home and claim the result, although we couldn’t afford to back off as there was a queue of cars just seconds behind us which we had to hold off.

Stage 5 was very enjoyable, the route now running in the opposite direction around the ranges meaning all of the corners we had learnt this morning needed to be driven completely differently. The stage was fast and flowing and the pace was relentless, the sweat was pouring out of us in the hot car being driven at maximum attack. A slight overshoot on a square right was the only memorable error, and we looked forward to stage 6 to push on harder.

We started stage 6 thirty seconds behind the Super 1400 Puma of Matt Reid, a much more professionally built car than our own Puma, with great equipment such as a sequential gearbox and a revvy 1400 with about 180bhp. We joked at the start that we would try and catch him in the stage, thinking that it wouldn’t really be possible. Unbelievably, a couple of miles in to the stage we had him in our sights, and after 3 miles we were right on his rear bumper. Phil sounded the horn to indicate our presence hoping that we would be let past to continue our charge unobstructed. Unfortunately, this was not the case. Matt continued to refuse to let us pass for the remaining 5.5 miles of the stage, using his power advantage to hold us off on the straights and then holding us up in every braking zone and corner. It was incredibly frustrating to be loosing so much time, if we’d caught him in 3 miles, how much time were we loosing along the next 5.5? It felt like an age.

As we pulled up to the stop line steam was coming out of the bonnet, the car had overheated due to the lack of airflow behind the S1400 Puma, the temperature was reading 130c and we were worried for the engine. Phil leaped out of the car to see Matt, I urged him to remain calm. Matt wasn’t apologetic at all and seemed to have enjoyed holding us up, a true lack of sportsmanship.

Back in service we had to let the car cool down, clean up the engine bay, refill the coolant and then bleed the system. Luckily it was quite a long service and we had the help of Tom Bruce to get us sorted in time. The car didn’t seem like it had suffered any damage and we headed out to SS7, the first running of the final stage.

Stage 7 used a lot of the roads already used throughout the day so we could really attack the stage. We had a great push through this stage but had to let a couple of cars through, firstly a C2R2 Max and a very impressive Subaru Impreza. In Gary’s haste to let them through without causing a holdup he probably didn’t pick the best place to pull over and almost ditched the car, a lesson learned for next time. It wasn’t long after this in the same stage we had our biggest moment of the day. Catching a Peugeot 205 quickly it pulled over to let us pass on what Gary assumed was a clear piece of grass. Unfortunately, no sooner had we pulled on to the grass were we presented with a row of very solid looking rocks placed perpendicular to the road. Gary had to haul the car back on to the road and try to slot back in behind the 205, however the rear end had different ideas and lost all traction on the soggy grass, pitching us in to an uncontrollable spin, which resulted in us hitting the grass on the other side of the road and coming gently to rest against a rock. Luckily we managed to get off the grass and back on to the road, no doubt largely due to the addition of our Gripper LSD fitted a couple of months beforehand. 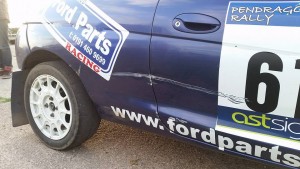 The result of “glancing” a rock.

Unsure if we had damaged anything, the short run to the finish was taken cautiously. At the finish line we asked the helpful marshal to check for any damage, he came back and said “you’ve definitely glanced something”.

The road section to SS8 was tight, only 4 minutes to be down the road ready for the start of the last stage. We managed to jump out of the car in the start queue and have a quick look to settle our minds before we tried to drive the car flat out for one last time. There was a large gouge down the driver’s door stretching in to the rear quarter, and the wheel was scuffed quite badly, but everything looked to be pointing the right way and no obvious show stopping damage.

Stage 8 was brilliant, a clear run through 9.5 miles of fast and twisty roads, it felt like our best run of the day. No errors that come to mind and we really pushed the limits of the car on a large percentage of the corners. We crossed the finish line and had made it to the end, something an amazing 41 competitors hadn’t managed to do that day. That felt like a victory in itself.

Once all of the times were in we had finished 29th overall, our best result to date. Without the spin and hold up it could have been even higher, but we were happy with that. Looking through the results we couldn’t see any car with less power than us that had finished above us. 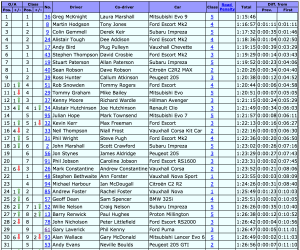 Mixing it with some powerful cars.

The car will need a good looking at before the next event to make sure there’s no damage from the overheating, all being well we will be out on the Keith Knox Cheviot Stages on 9th October.

We’d like to thank all of the marshals and organisers for putting on such a great event, we’ll definitely be back.