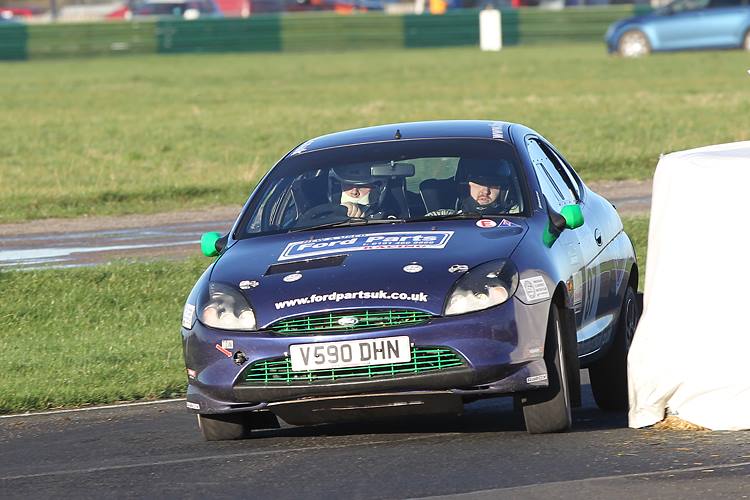 The Christmas Stages was the 3rd event for our Ford Puma 1.7. After a bit of a false start in our first 2 events the main aim of the day was to get to the end of the event and learn how the car handles in high speed corners. We’ve also registered for the North of England Tarmac Championship and this was round 1.

The first stage was approached with caution, trying to find out how much grip we had and how far we could push the car, as well as getting to grips with the stage layout. After 6.1 miles we arrived at the finish line, everything in 1 piece.

Through the rest of the mornings stages we gradually got quicker and pushed harder each time, a spin on stage 2 showed where the limits of grip were. We caught a few cars mid stage, but the Puma didn’t quite have enough power to pass on the straights meaning we lost some time stuck behind other cars.

On stage 3 we picked up a puncture, someone else’s brake pad retaining pin had went straight through our tyre, all 3 inches of it! Luckily the tyre didn’t deflate on stage as we would have had to stop to change it.

After the lunch break we resumed with stage 5, this time the stages were to be ran in the opposite direction. The grip levels had dropped off as the temperature fell resulting in some interesting moments in this stage. We tidied things up for stage 6 and set a much better time.

The last 2 stages of the day were ran under the cover of darkness, so we fitted our newly created lamp pod. We’d spent many hours in the weeks before the event creating this lamp pod and completing all of the wiring, and after using it on stage we can say it was definitely worth it. It was hardly any different from driving in the daylight, and we even managed a couple of over takes on the last stage of the day.

The car performed brilliantly all day, we didn’t have to put a spanner on it at all. We’ve identified that we really need a limited slip differential to help us get the power down and some extra power would be welcome. However, as with everything in rallying, extra money is required, so we’ll have to work with what we have for now.

We started as car 87 and finished 53rd overall. Many thanks to EVERYONE who has helped and supported us, from friends to family and sponsors. We couldn’t do it without you.

Our next event is the Jack Frost Stages, round 2 of the championship, on the 17th January 2015 at Croft.