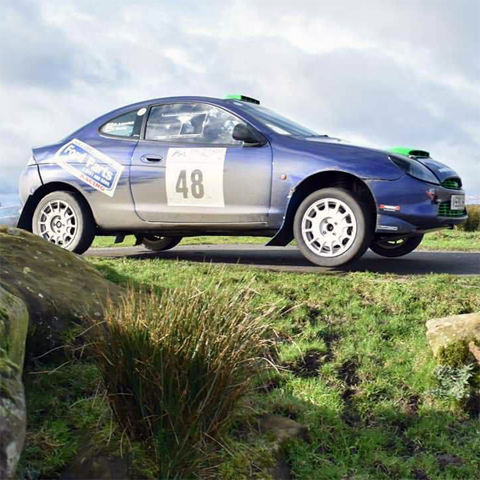 Sunday 22nd October 2017 marked a year since the infamous bridge incident on the Cheviot Stages 2016 (see picture), and we were once again back up at Otterburn Ranges for round 2.

Gary doesn’t have a good history up here, having only finished 1 out of 3 rallies started. The plan for the day was to get to the finish in order to bump the finishing rate up to 50%, but of course nothing is ever simple or easy in rallying. 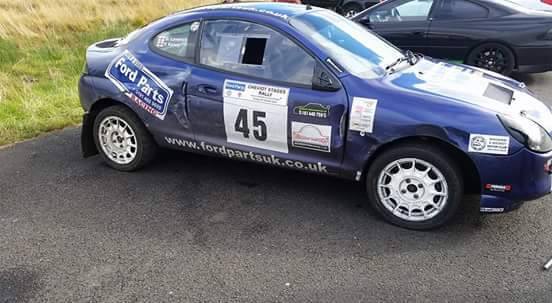 Since the engine let go on the Pendragon Stages, the PG Motorsport workshop has been a hive of activity, late nights and long weekends have been spent rebuilding the engine to be bigger and better than ever before. Our sponsor, Ford Parts UK, kindly sourced us a replacement engine within 24 hours of the failure, and another 24 hours later we had the engine stripped down and the crankshaft removed so that it could be sent off to have a keyway added to the cambelt drive pulley, safeguarding us from a repeat failure.

In an effort to gain more than the 130bhp of the previous engine, we sourced a more aggressive set of cams which gave an extra millimetre of cam lift, and shimmed them up to the tighter end of the tolerance limit. The flywheel was also lightened and the whole crank, flywheel and clutch assembly balanced. A large alloy radiator with twin fans was also installed to keep everything cool. 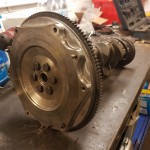 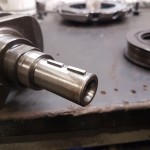 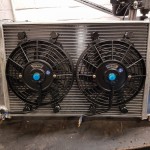 After a trip down to Motoscope in Northallerton, the replacement engine came out with 185bhp and 140lb/ft of torque, revving to 7500rpm, a whole lot more than the Puma has experienced before.

As the day of the rally dawned we awoke to see there had been heavy overnight rain, which had eased to a constant drizzle as we were setting up our service area. The forecast was for the rain to stop before the first car set off. With a strong wind blowing we banked on the stages drying quickly and put on a pair of soft Dunlop tyres up front and intermediate Pirelli’s on the rear.

We started stage 1 cautiously, with the rain lingering for longer than forecast and the stages not quite dry enough for the tyres we had on the car, combined with the fact the car was now 55bhp up on anything we’d experienced before. The time wasn’t great, but we were through the stage in one piece and set off on the long road section to stage 2. By now the conditions were becoming more favourable, but Gary was struggling to dial himself in to the longer braking distances required now that we were travelling so much more quickly. Stage 2 was a clean run, showing more pace, but it was clear there was a lot more to come.

Stages 3 & 4 were very slippy and the roads on this side of the ranges hadn’t dried as much as on stage 2. Braking was very tricky and we were caught out at the bottom of a long downhill section whilst trying to slow for a chicane. The car barged in to a bale with the front right headlight but luckily no damage was sustained and after a quick reversing manoeuvre we were on our way again. After the first 4 stages we were sitting 40th overall and 5th in class. With stages 5-8 being a repeat of 1-4, the roads now drying and Gary becoming more comfortable with the car and it’s extra power, we decided now was as good a time as ever to have a push on.

Stages 5-8 felt good, the car came alive as we pushed it harder, and we were taking huge chunks of time out of our first run times. Comparing the first loop of 4 stages to the second loop, we were a whole 1 minute and 50 seconds quicker. We had a slight hold up on stage 7 as we caught one of the Mini’s, but it quickly let us pass and not much time was lost. Considering stages 5-8 in isolation, we were 23rd quickest overall and 3rd in class.

After a quick service with nothing to do other than add fuel and check tyre pressures, we were back out for stages 9-12, which consisted of stages 1-4 ran in reverse. Feeling more confident than ever the times were looking good, consistently setting stage times in the top 20’s. Unfortunately we suffered a hold up on stage 10 after catching a Mini 4 miles in to the stage, this time the Mini didn’t see us and we were stuck behind it for the next 3 miles until we crossed the finish line, losing quite a bit of time. 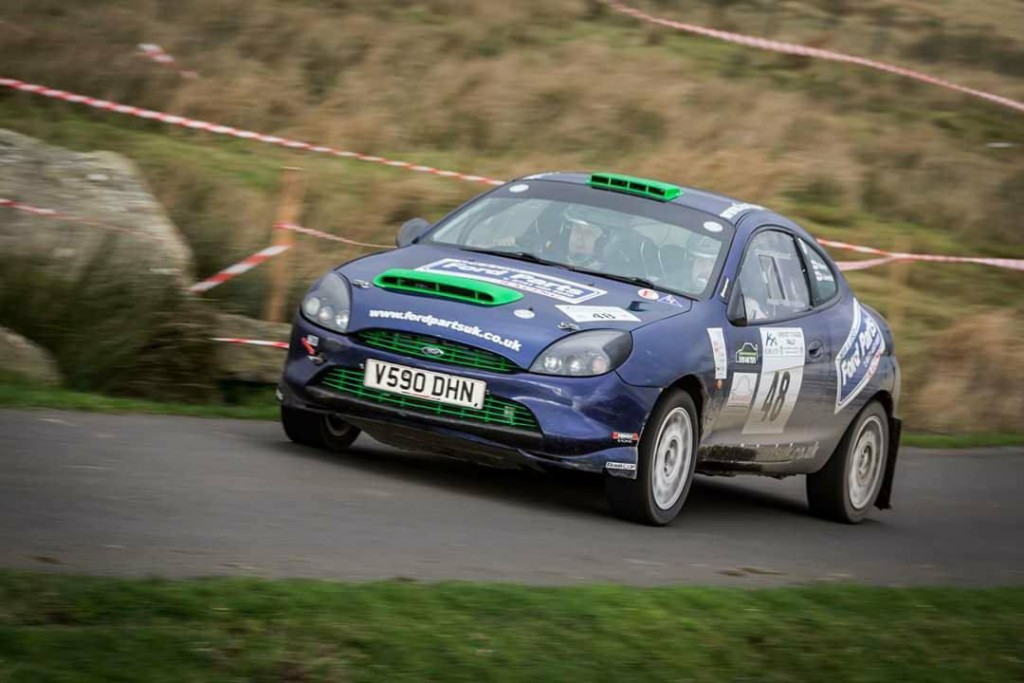 Stage 11 went fairly smoothly, and with only 3 stages left to the end of the rally, we started to look forward to finishing an event on Otterburn. Alas, a few miles in to stage 12 all hopes were dashed as Gary totally underestimated the amount of braking required to slow down from 120mph for a 90R at T junction. We crossed the T junction whilst still travelling 40mph, leaped the drainage ditch, and found ourselves driving around the moorland looking for a way back on to the road. In the end it was the ditch that we had previously leaped that would stop us going any further. Without the 120mph run up we were unable to get back across the ditch, and that marked the end of our rally.

Looking on the bright side, the car suffered no damage. We were able to drive back to service with no problems after a marshal in a 4×4 pulled us out. We were also showing good pace with the new engine, at the time of retirement we were running 25th overall, despite the mornings slow start, and were sitting 3rd in class. As we develop a better feeling for the car and become more accustomed to the extra power the aim is to put together some more consistent runs and demonstrate our true potential.

We are next out on the Hall Trophy Rally at Blyton on the 25th November, with a subtle change the the crew. The plan after that is to contest the AS Performance North of England Tarmac 2018 Championship, our first attempt at completing a full championship. The first round is the Christmas Stages at Croft on 30th December.