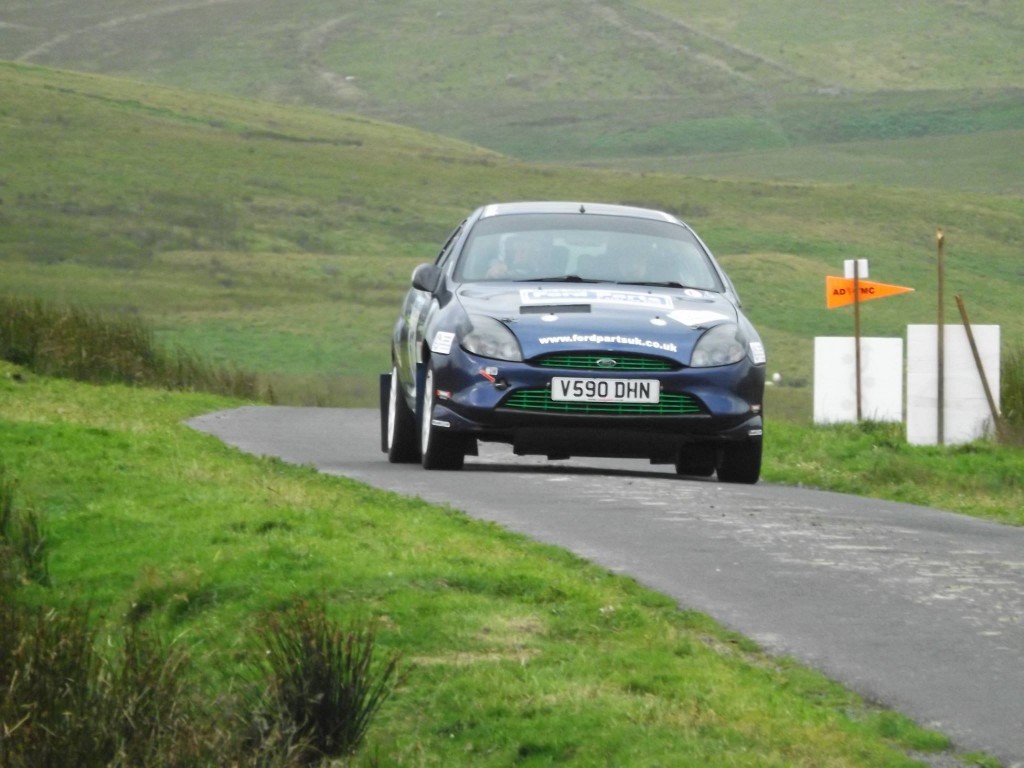 After a long 4 months since the last stage rally, the weekend of the Tyneside stages held at Otterburn Military Camp had arrived. There was some trepidation about this event on Gary’s behalf after he spectacularly blew the engine up on SS1 of this event last year, and some demons to be put to bed to try and shift the nickname ‘quickshift’.

Saturday was spent reccing, a slow run over the stages in order to make/check pacenotes and see where we could try to gain those vital seconds the next day. We also scrutinnered and signed on so that Sunday morning could be spent preparing the car and getting ready for the first loop of 3 stages.

An early start on Sunday to get up to the ranges in time to set up and start the rally at 9.03, the wheel nuts were checked, tools loaded and tyre pressures set. All seemed well and we set off down the road section to SS1. As we set off the start line the car seemed to be lacking some of it’s usual power, this is not a good thing in a 1.7 Ford Puma as we only have about 125 bhp to start with! By the end of the 3.30 mile first stage the car behind was right on our tail over the finish line.

In the queue for SS2 we let the car behind us move forward so that we didn’t hold them up, as we started the stage the lack of power was getting worse and the car wouldn’t pull above 6k revs. A long drag through the stage at what seemed like a snails pace, at this point we were just praying to make it back to service to try and rectify the fault.

SS3 was worse again, up the steep hill out of the Watty Bells compound we couldn’t even get more than 6k revs out of 2nd gear, which our ratio calculations show is a shocking 49mph. Gary pushed the car as hard as possible through chicanes and under braking to try and minimise the losses, but if the problem couldn’t be fixed it seemed pointless continuing.

Whether through luck or skill, our first suspect turned out to be the cause of the problem, a blocked fuel filter! The filter was bypassed in the short 15 minute service and will be replaced before the next event. Strangely on Saturday evening we had discussed changing the fuel filter as a precaution, but decided to stick to the old wisdom of ‘if it’s not broke don’t fix it’, we won’t make that mistake again.

Stages 4-6 were a repeat of 1-3, and with full power restored we did the same loop a whole 70 seconds more quickly.

Stages 7-12 were very fast, a lot of the top cars were beating the bogey times and we were losing a lot of time down the long fast straights but there was nothing we could do to prevent that. This was our first event on pacenotes and throughout the day Gary grew more confident in them and started to lean on the tyres through the faster corners, although there is more time be be gained here as confidence in the car grows.

Particular highlights of the day include a flat out run down to junction 5 of stage 6 with some very late braking, resulting in Phil proclaiming Gary to be a lunatic. Also the huge cut we took on the run to the finish at Dudlees, it was said we were taking one of the biggest and bravest cuts of the day! There was also a hairy moment on a 3R over a cattle grid which Phil had assured Gary was flat, it was but only just.

We finished up in 50th overall, a little lower than hoped for but the stages didn’t really suit our car and the early problems further hampered us. Hopefully we can do better on the Cheviot stages in October using the experience gained.

A big thanks to all of the organisers and volunteers who make the rally happen and another big thanks to Mark Pearson for the loan of his trailer this weekend.

The next event is the Pendragon stages at Warcop on the 11th September. A new fuel filter needed and a quick wash and we’ll be ready to go.